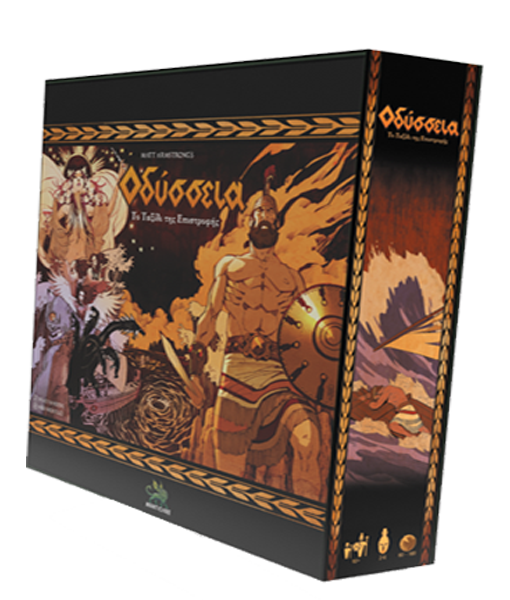 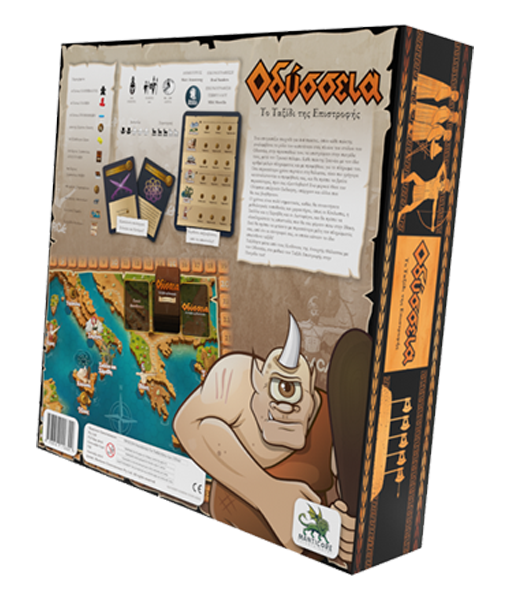 Ages 10+
Card drafting games are games in which players pick cards from a limited subset, such as a common pool, to gain some advantage (immediate or longterm) or to assemble hands of cards that are used to meet objectives within the game.

Dice Rolling
Player elimination occurs in multiple-player games (>2) when a player can be eliminated from the game and play continues without the eliminated player.

13 Ratings - Board Game Rank: Not Ranked

Be the first to review “Οδύσσεια: Το Ταξίδι Της Επιστροφής”

The story of Odysseus’ journey home from Troy starts with his fleet leaving Troy after the end of the Trojan war. As the captain of one of his ships, you must get your crew home to Ithaca, but complete a series of missions on the way home, whilst the Gods will Bless and Curse your ship.

Voyage home is an adventure game where you must sail your ship home after completing a series of quests! The other players are also trying to do the same thing, but each player will also play the part of the GODS. Some of the Gods are out to destroy enemy ships whilst other GODS are out to help your ship! Some Blessings, Curses and other effect spells are working in great combination with each other to help you complete the game before everyone else!

Gameplay Detail – The game is divided into two ACTS. ACT I is the main part of the game, ACT II is the end game, which may not involve all of the players.

ACT I has X amount of turns, which is dictated by 10 “oversized” cards that are on display at all times on the table, they are randomly sorted before the game starts so that only one is visible at a time. Once all the “oversized” cards have been exhausted then the game goes to ACT II which is a sudden death ending to the game.

Phase 1 is made up of a card draw phase where players can choose to draw cards from the GODS deck (which makes up their hand during the game which allows the players to also play the part of the Gods themselves, they can play blessings and curses as well as effect cards that effect either other players ships, their own ships, other players, areas on the map or the general gameplay state (called Global effects). Phase one usually takes around 20 seconds.

Phase 2 is the Card playing phase where each player will choose which cards they want to play and then play them. There is a special order that cards are played in and a player order so players must all choose which cards they’re playing first for that turn before all the cards are revealed. During this phase any and all cards that are played will also be resolved if possible. It’s good to make up combos of cards in your hand, and then play them all at once, so that you can propel your ship more quickly through the quests. This is the most lengthy phase of the game. Some players may have larger hand sizes and will take some time to work out what they’re going to play, and once cards have been played they need to be actioned. This could take 3 or 4 minutes per player to work through, depending on how experienced players are at the game and how many players there actually are.

Phase 3 is the movement phase where you will each roll your dice and move your ship across the map. You need to complete all 6 quests before you can head back to Ithaca. It doesn’t necesarrily have to be ACT II for you to be travelling home to Ithaca if you have been so successful to have completed everything before then. However, it’s quite unlikely that you’d be heading back so soon, considering the temperament of the Gods after all. Movement is important as other players can’t land on the same spot as you, and ports can only be visited by two ships at once. Player order plays a reasonable role on how effective your movement phase is going to be, as does your dice roll. You can skip your movement phase to instead draw off a SHIP deck (another deck of cards) which enables you to upgrade your ship to enhance your ability in some aspect or another. Although movement itself is done in player order, it shouldn’t take more than a minutes for each player to work out where to move their ship to once they’ve rolled their movement dice.

Phase 4 is cleanup. You will remove one of the “oversized” cards if required (which reduces the length of the game, you will also perform any other cleanup actions (some cards require you to perform actions during this phase. Then the player 1 ICON is rotated clockwise, so each players number order changes for the next turn. This phase isn’t very complex and is usually over in a minute or so. It usually just involved an oversize card being removed and all the cards that got played this turn being discarded to the discard pile.

Quests and finishing the game: Each ship must complete all 6 quests before being able to return to Ithaca. Each ship must closely monitor it’s supplies (which keep the crew well fed!) and crew number as well as its riches (GOLD!) as this may become very important as you endeavor to finish the game before time runs out!

To win you must be one of the players who made it back for starters! If players have not completed all 6 quests when ACT I ends, then they’re lost at sea and take no further part in the game. There is some sudden death rules that effect the remaining players but as long as you make it back you have a chance to win! The amount of crew is the first factor in deciding a winner, whilst Gold is the secondary factor, but usually a winner is obvious!