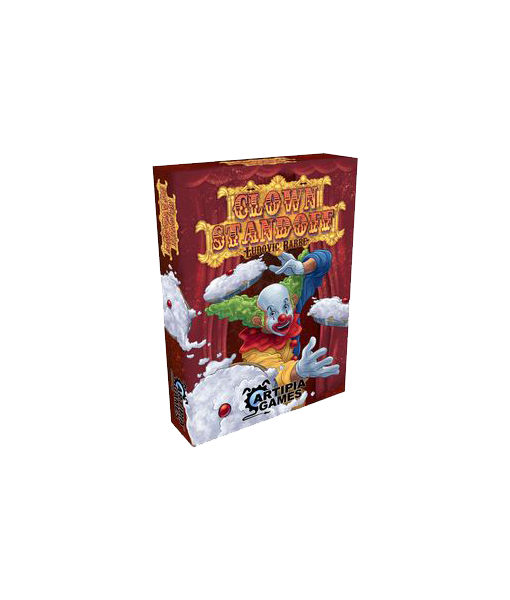 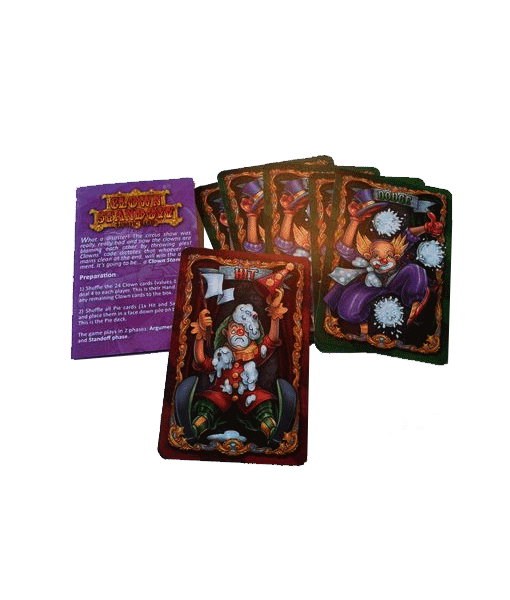 Ages 8+
Player elimination occurs in multiple-player games (>2) when a player can be eliminated from the game and play continues without the eliminated player.

Player Elimination
Games where you repeat an action (or part of an action) until you decide to stop due to increased (or not) risk of losing points or your turn.

Be the first to review “Clown Standoff”

The circus show went really, really bad, and now the clowns are blaming each other…by throwing pies! And the clowns’ code dictates that whoever remains clean the longest wins the argument.

Clown Standoff is separated into two phases. Phase one is a trick-taking phase with simultaneous card selection. Each player has cards 1-6, and four times players each lay down one card; tied cards are eliminated, then the highest card wins. The one exception to this: If a 1 and a 6 have both been played, then the 1 card wins the trick. All winners keep the cards they used to win the tricks, then they move to phase 2.

In Phase 2, six "Pie Throw" cards are in the middle of the table: five "Dodge" cards and one "Hit" card. Starting with whoever has the most cards from phase one, players then take turns as follows: They can draw a card; or they can discard one card from the ones they collected in phase one to shuffle all face-up Pie Throw cards, then draw one; or they can discard cards equal to the number of players who are still in the game to pass their turn to the next player.

If a player draws a Dodge card, nothing happens and the remaining cards move to the next player. If a player draws a Hit card, that player is out of the game; after this, all Pie Throw cards are again shuffled to form a deck, and the player with the most cards from phase one starts a new turn.