Modular Board
Maneuvers that directly attack an opposing player's strength, level, life points or do something else to impede their progress. 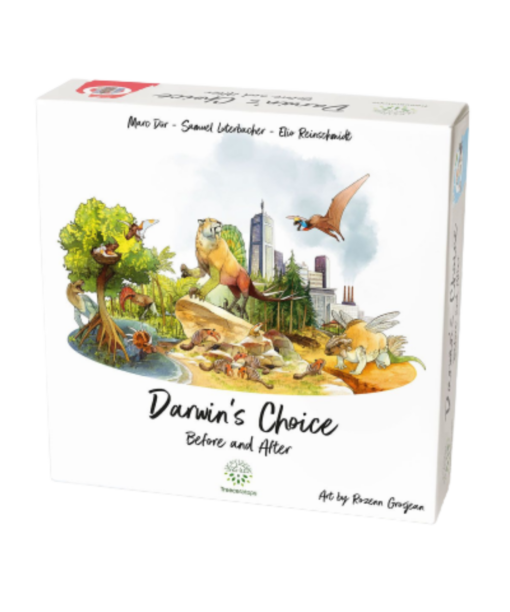 Darwin’s Choice – Before and After

Be the first to review “Darwin’s Choice”

After millions of years of wasteland on Earth, animal life is finally emerging. But the world is still forming and undergoing a constant change. Only those species able to adapt to the ever-changing conditions will survive to leave their mark in history. Here is your chance! Do your best to become Darwin’s Choice.

Darwin’s Choice is a competitive card game in which players create their own animal species from more than 230 animal cards. These animal species will be placed in biomes that differ strongly in their requirements and the food supply. The highest possible adaptation of animal species to their biomes not only ensures their survival but is also rewarded with the coveted Darwin points. In addition to a high adaptation the species with the highest competitive strength are also awarded across all zones.

Between the 3-4 eras played, conditions can change completely due to biome changes and event card effects. The task now is to adapt the successful animal species of the past eras to the conditions of the present, either through sophisticated mutations or smart migration to other biomes. However, you must always keep an eye on the animal species of the other players in order to anticipate their actions, because anyone who acts too quickly or imprudently might be unable to react at the decisive moment.

In Darwin’s Choice the victory points (Darwin Points) are assigned to the animal species and may only be collected by players after the last era has ended. With this mechanism, the game remains exciting to the very end, because the extinction of a species also means the loss of its associated Darwin points.

Darwin’s Choice is a strategic allocation game in which you must think carefully about how to use your cards. The large number of own possibilities and the ones of your opponents lead to a high variability, which makes thinking through each action and thinking ahead indispensable. The randomness caused by drawing cards (animal cards, biomes, event cards) requires flexibility and fast rescheduling. This results in each played game being completely different and guarantees a high replayability.

All pictures, icons and symbols of Darwin’s Choice are hand-illustrated by the French illustrator Rozenn Grosjean, giving the game its very own style.